Today I want to talk about Sass, why I love it and why you should use it. Sass is a css preprocessor, meaning it’s a file format which you compile to css to be served along side your site. Sass comes in two syntaxes .scss and the older syntax .sass also called indented Sass, whenever you hear people talking about Sass they’re probably talking about the newer syntax. In this post I’ll be referring only to the .scss syntax.

Why I love Sass

Sass is what CSS should be, it has really good abilities that are really missing in CSS. After working with Sass for some time you won’t understand how css doesn’t include them built-in.

The 3 big things that Sass gives you are:

Nesting is the ability to write your selectors in a nested fashion where you don’t have to repeat yourself as you go down the hierarchy of your style. It makes changing top sections of selectors painless and the css code more DRY and concise.

The last thing you can do with nesting is reverse nesting - adding a selector before current selector. This feature is amazing and you can do cool stuff with it like browser specific hack, site theming and much more.

I use this to handle IE specific hacks, I just add a class to my <HTML> tag with the version of IE in question class='ie7' and then inside the code whenever I need to do a IE specific hack I just use reverse nesting

Variables is a pretty straight forward feature, in Sass you can define variables and use them later. This helps reduce copy-pasted variables like colors, sizes and strings. Variables are defined in this syntax $main-color: #ffeeff; and can be used just by using them instead of the constants you would normally use.

Sass also supports basic operations on variables like math operations, string operations and even color functions. Color functions are very cool functions that let you modify colors ever so slightly based on a base color instead of hard coding all the color variations, you can lighten a color by x percent, opacify or change hue - for a complete list of available functions check the Sass Reference

You can also do some very basic programming with Sass stuff like if and for which are really helpful especially helpful when you add the next thing Sass has to offer - mixins.

Mixins are ‘functions’ that you define and can use across the system, they can be used in different selectors and you can pass in arguments. There are two different uses for mixins that I find, When you need a function shared across the site in several different contexts or when you define “private” mixins to help you manage your css and separate responsibilities better. Mixins let you {“ treat your stylesheets as first-class citizens in your code base. “}

Mixins are priceless when you need to have cross-browser support, the time we live in right now has us using these amazing css tricks which aren’t always implemented in all the browser or if they are they’re wrapped in browser specific prefix. You can use mixins to help you use the stuff you want while not having to write all the prefixs every time. For example instead of writing -webkit-box-shadow... -moz-box-shadow you can now just write @include box-shadow(); and the mixin will take care of writing all the correct prefixes and if needed - change the parameters to fit each browsers quirks. But you don’t really want to right all these mixins for yourself, this is where Compass comes in.

Compass is a Sass library containing many of these helpful mixins for cross browser support and other handy stuff that are very helpful. It has almost everything you need to build beautiful stylesheets with cross browser support - something that if you tried know that gets messy very fast.

Why you need it?

The transition from css to Sass is painless - you don’t need to change any old files you already have in your system. Just rename your files from .css to .scss add a compiler (Compass is one, Rails 3.1+ is another) from then on just start using Sass’s abilities whenever you need them. This is a true smooth transition and probably the reason why the .scss syntax beat the old indented syntax. With Sass you can easily manage a system of plugins and shared library ‘code’ between different parts of your site and even between sites in a way which plain css can never do.

With Sass & Compass you can have better Cross browser support especially if you’re planning on using all the new ‘CSS3’ properties. 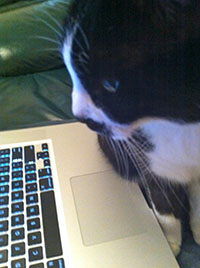 Even if you’re not using new properties Sass gives you workaround for the basic stuff broken on IE - stuff like display: inline-block;

And most of all, Sass lets you treat your stylesheets as part of your code base, with the respect they deserve and with the power that you need. So go start using Sass and enjoy the power!

There are some other CSS preprocessors out there. I didn’t have the chance to use any of them, but people like to know about alternatives. Less is the biggest rival to Sass and is mature almost as must as it, Stylus is another alternative albeit a smaller one, there are several others but they are really niche. If you’re looking for a CSS preprocessor you should probably go with eiter Sass or Less.